A flight in the SR-71, or the ‘Habu’ as the crews call it, starts long before you enter the cockpit. With the aircraft making Mach 3, you can’t simply fly where you like or take a wrong turn. The Blackbird goes half a mile in the time it takes you to say ‘Oops’, it can be 20 miles in enemy territory by the time it takes you to check a map, and the turn radius is more than hundred miles. This means that basically anything you do needs to be planned in advance.

On longer recon flights, we would have tankers waiting for us in certain locations, but today is just a training flight. We will take off from Nellis AFB, Nevada, go north climbing, then turn around and overfly Nevada at 85.000 ft under mission conditions, then descend and head back to Nellis. All the waypoints for this flight have to be entered into the Astro-Inertial navigation system of the Blackbird in advance.

I am using Flightgear’s route manager to define the waypoints. As in reality, the plane is difficult to control at high altitudes manually, so the autopilot will have to take care of the climb to 85.000 ft. The waypoints need to be defined carefully such that the course is even possible to follow – at service ceiling, the plane is not very maneuverable. I could also, using the AI system of Flightgear, arrange for various tankers to meet me at certain points during my mission if I would want to fly a realistic long range mission profile for the SR-71.

When everything is ready, we finally enter the plane and taxi to the runway. The weather conditions are ideal for reconnaisance – it’s a very clear day with dry air and few clouds. 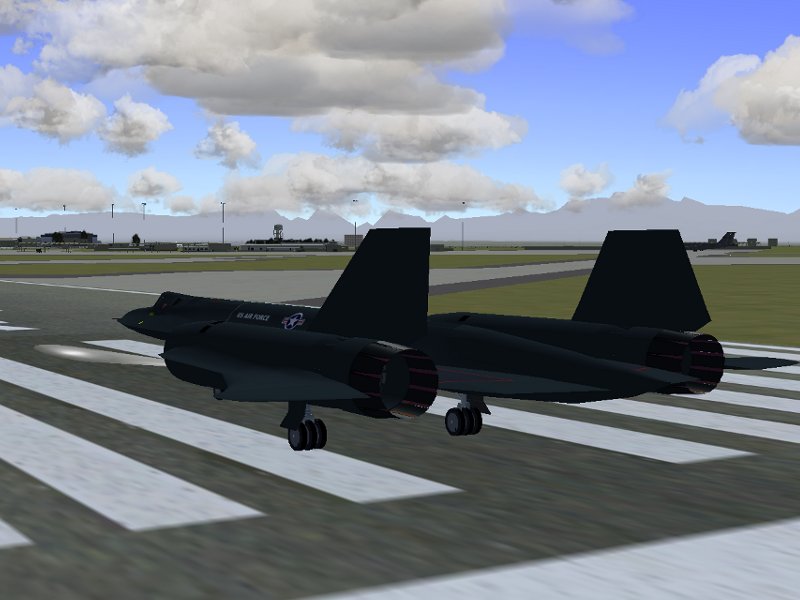 Many airports in Flightgear have a detailed network of taxiways and one can start the simulation on a specified parking position rather than ready on the runway, and an ever-increasing number of airports also is populated in full detail with 3d models showing not only the main buildings, but also other operations currently ongoing. Nellis AFB is one of the most detailed airports, where one can spend literally hours to explore every detail.

With full afterburners, we gain speed and take off. 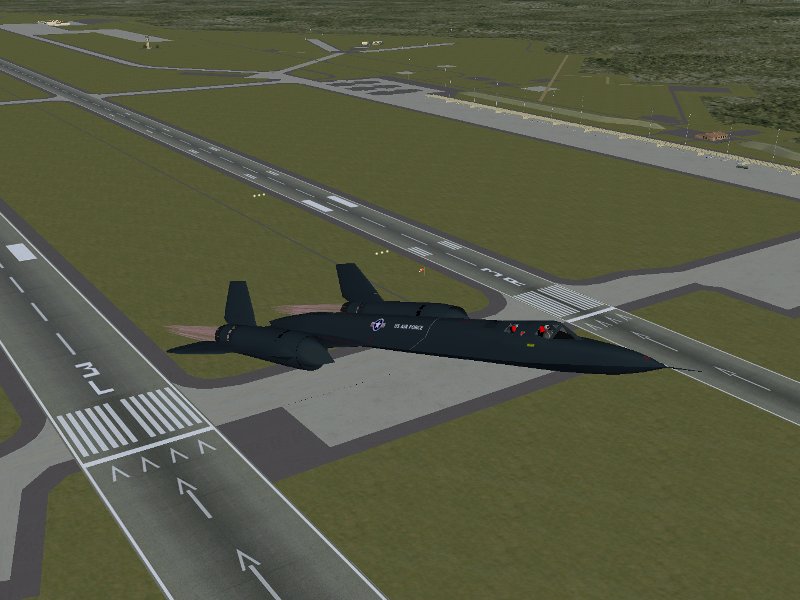 The two J58 engines with 34.000 pounts of thrust each sure look impressive with full AB thrust engaged – but the Habu is also a rather heavy bird. Moreover, the engines are designed for high altitude operations, so we just have a thrust/weight ratio of about 0.44, nowhere near to a fighter jet, and so even with full AB thrust, the climb is rather slow. 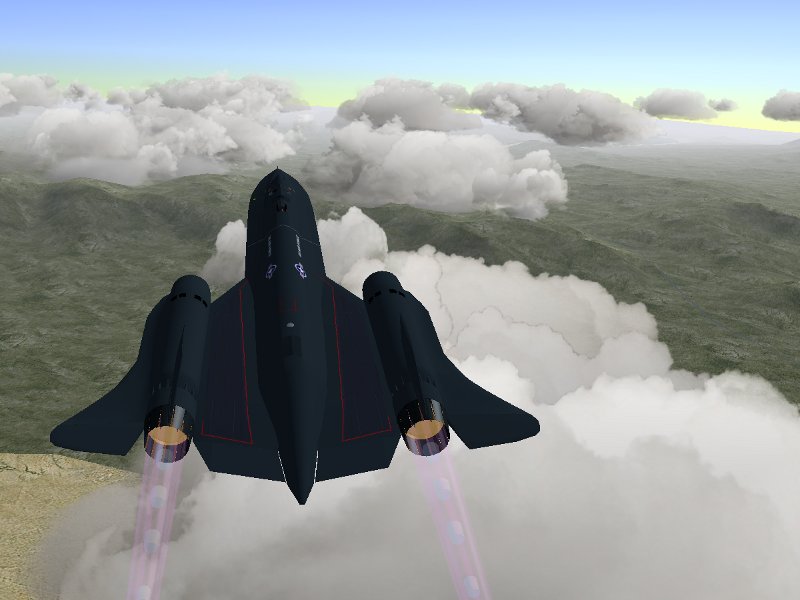 At about 25.000 ft, we go just a little supersonic for the first time. In this regime, wave drag is very high and the engines actually are not powerful enough to accelerate the aircraft any further. Also, in the thin air, the plane becomes increasingly difficult to handle precisely, and I transfer control to the autopilot. 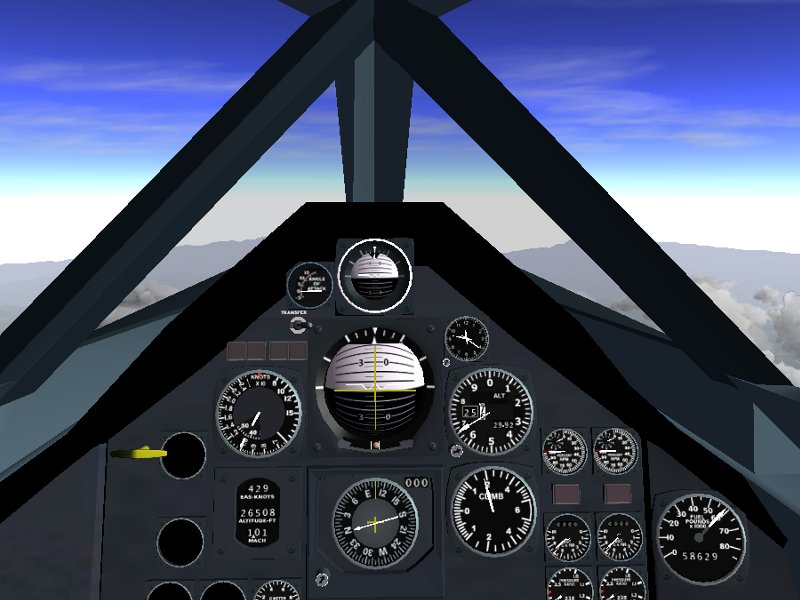 In order to climb out to full altitude, we have to use gravity’s help and perform the so-called ‘dipsy’ maneuver – we climb to 33.000 ft, level off and let the plane go as fast as it can, then do a shallow dive to about 30.000 ft to let gravity accelerate us to Mach 1.25. Now we’re out of the wave drag region, i.e. drag is much reduced and we can climb further.

Flightgear handles the procedure rather accurately, It is not possible to simply hit the afterburners and fly to 85.000 ft, and if you do not reach sufficient speed at a given altitude, you can’t climb any further. The Blackbird reqires the pilot to adhere to the essential procedures. As in reality, in this altitude it is very difficult to control the plane manually with the precision required for the maneuver, but the autopilot can handle it well.

At the edge of space

Under the control of the autopilot, we continue to climb with a constant KEAS (equivalent airspeed) value of 450 kt all the way up to 70.000 ft, and then let the KEAS value drop to 400 kt while we reach 85.000 ft and Mach 3.2. At this altitude, we’re literally on the edge of space, and utterly alone – no other aircraft can reach this altitude. 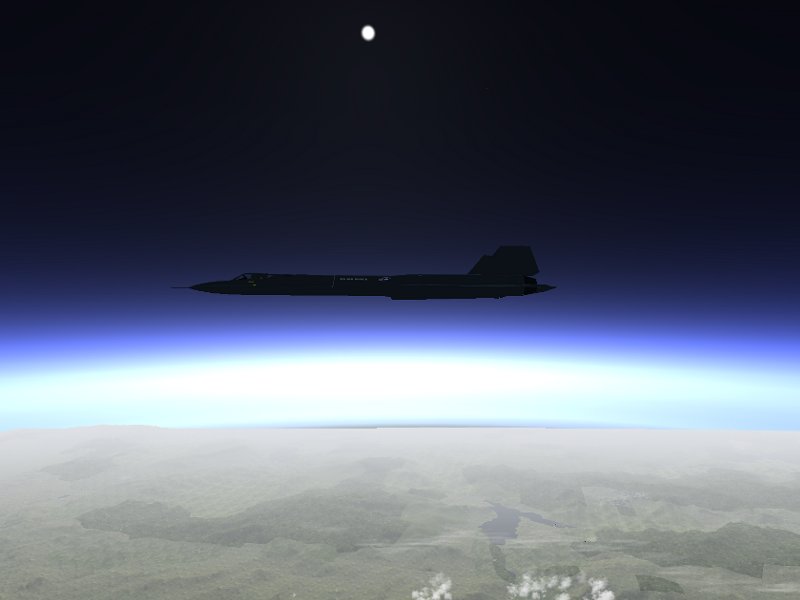 The view from 85.000 ft is spectacular on a clear day, and at mission altitude the operator in the back seat becomes busy while the pilot can relax a little since the plane does little but fly straight under AP control. 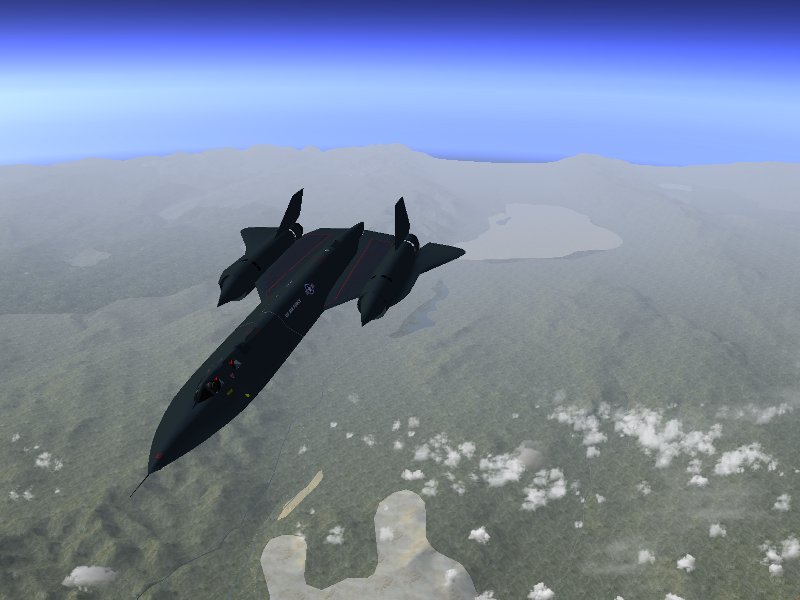 Flightgear has an experimental skydome shader which tries to solve the physics of light scattering in the atmosphere in addition to the default skydome which handles both foggy and clear conditions reasonably well. The more detailed scattering solution is especially suitable for a thin atmosphere, such as at high altitude or on a very clear day, and it can give quite spectacular results under the right conditions.

At this altitude, the difference between indicated airspeed and the actual speed over ground is very pronounced: While we read just about 400 kt in the cockpit, we’re actually going more than 1900 kt groundspeed.

Flightgear has accurate models for the atmosphere at high altitude and effects like ram pressure taking the difference between true airspeed, indicated airspeed and equivalent airspeed, as well as Mach number to airspeed change with altitude into account. For most planes, these effects are not very prominent, but for the Blackbird they show up rather pronounced.

After completing the recon run, we slow down to 350 KEAS and descend again to 20.000 ft where I switch off the autopilot and resume manual control. In evening light, we head back to Nellis through a scattered cloud layer. 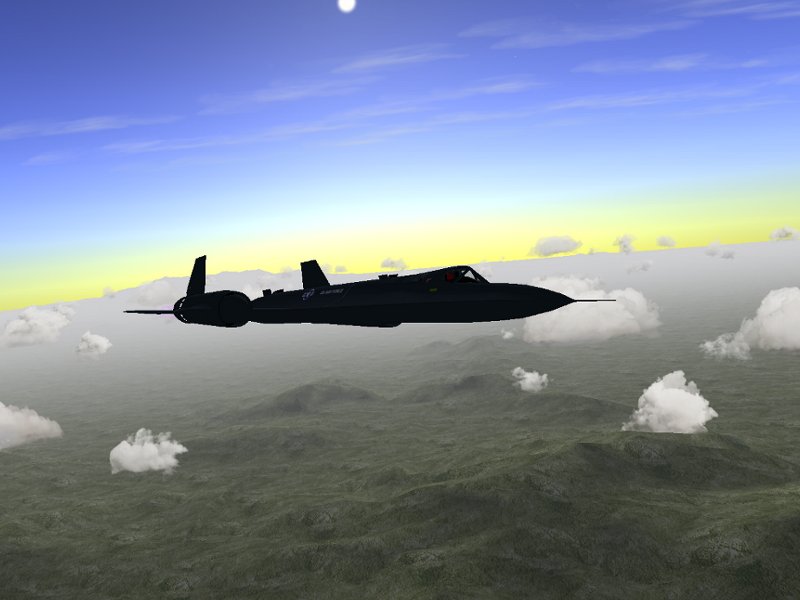 Some more dense clouds hang over Las Vegas as we merge into the approach pattern for Nellis AFB.

Cloud formation is tied to some degree to location: clouds are much more likely to form over the sun-warmed city than over cool open water. Also, terrain elevation plays some role. 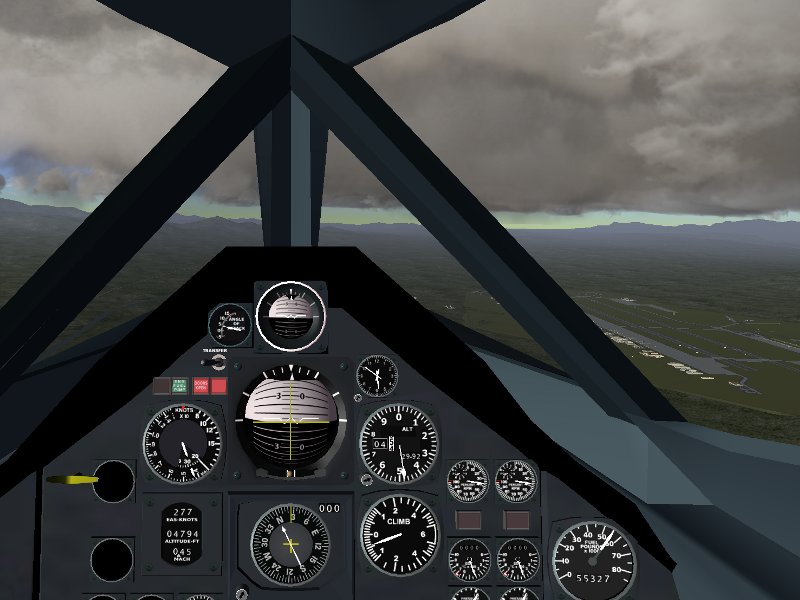 The Habu is a supersonic bird – at low speeds it handles like a brick. One needs to be very careful not to lose too much airspeed when turning into the final approach. As compared with other planes, the approach is also really fast to retain enough lift – the Habu approaches with about 220 kt and touches down with litte under 200 kt – more than many propeller-driven aircraft will ever make. However, there remains the problem of deceleration… As we turn into final approach, I arm the drag chute, which is automatically deployed as we touch down. 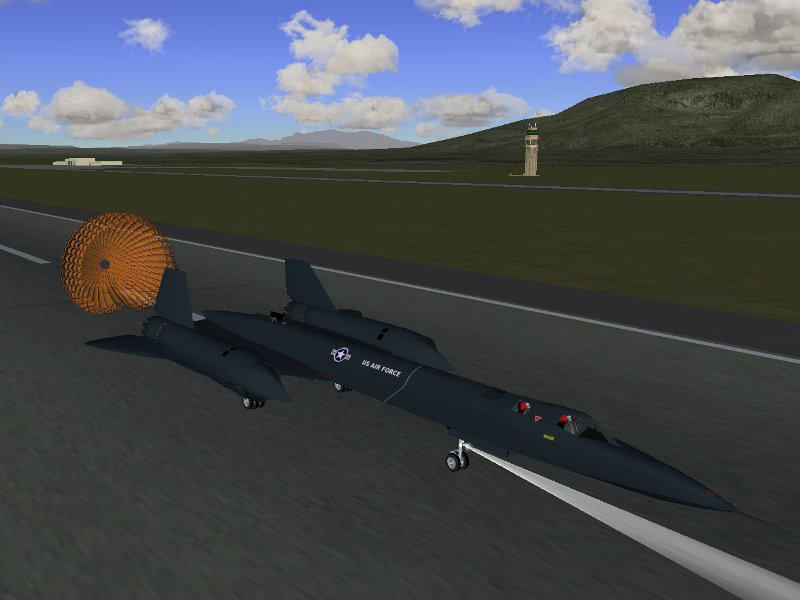 The JSBSim Flight Dynamics Model handles object like the drag chute rather well as external forces. The drag chute has its own aerodynamical properties, it feels the wind and the drag effect is velocity dependent. As in reality, it takes quite a lot of space to decelerate a plane touching down with 200 kt, and in fact without the drag chute it would be a problem to slow down even given the long runway at Nellis.

After a successful training mission, we reach the temporary parking position of the Habu and head for debriefing, before we leave the base for a nice, cold beer in Las Vegas. 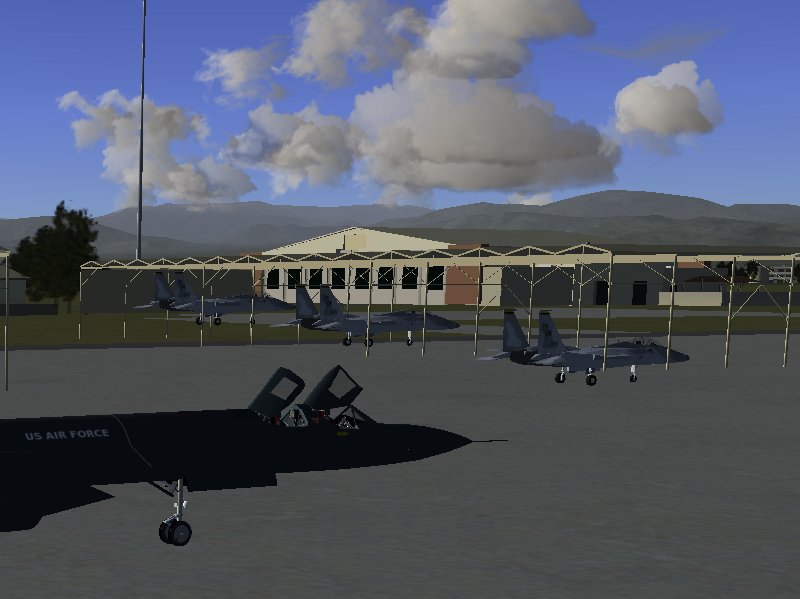 14 Replies to “Reconnaissance with the SR-71 Blackbird”